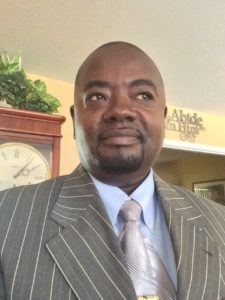 Rev. Okai was born in Buchanan City, Liberia. On hearing the call of the Spirit, he enrolled in the Monrovia Bible Training Center in Monrovia, Liberia, and was ordained to the public ministry in May 1990.

In 1997 the pastor and his wife Precious moved to the United States. In 2003, he enrolled in Concordia Seminary in St. Louis, Missouri, and through its Ethnic Immigrant Institute of Theology prepared for Lutheran Church Missouri Synod ordination. He completed his studies with Concordia and was formally ordained as an LCMS pastor in 2007.

Pastor Okai initially covered Sunday services for Holy Nativity and then served as Interim Pastor until being formally called by the congregation as Senior Pastor in 2009. He and Precious live in Owings Mills, Maryland, with their daughters Andriel and Angel and their son Andrew Jr.